This article has been translated. For the original please click here.

Treatment for sagging and black bears under the eyes that you do not want to fail by transconjunc...

The transconjunctival degreasing method is a cosmetic surgery around the eyes that makes a slight incision on the back of the lower eyelid. In general, incision-related treatments are more effective, but they tend to cause pain and longer downtime for the skin to return to its original state after the treatment. However, the transconjunctival degreasing method often causes mild pain, swelling, and swelling after the incision because the incision area is small, and does not leave scars on the skin surface . However, since the risk is not zero, it is important to know in advance what to do if you fail to make the procedure regrettable.

In the transconjunctival degreasing method, a small incision is made in the red mucous membrane part where the lower eyelid is turned over, and an appropriate amount of fat "orbital fat" (cancerous scab) under the eyes is taken out from there, and sagging under the eyes and black bear (shadow bear) ) Is a treatment method to improve .

Since the incision area is about 5 mm to 1 cm , swelling and swelling after the treatment are mild , and the incision is made on the back side (conjunctival side) of the lower eyelid, so no scars are left on the outer skin .

There is no need to suture because the incision is made in the mucosal area that recovers quickly. Therefore, you do not have to go to the hospital to remove the thread, and you can take it on a day trip .

Cause of sagging under the eyes "orbital fat"

The condition of orbital fat affects the symptoms of black bears, which appear to have sagging under the eyes and dark shadows. 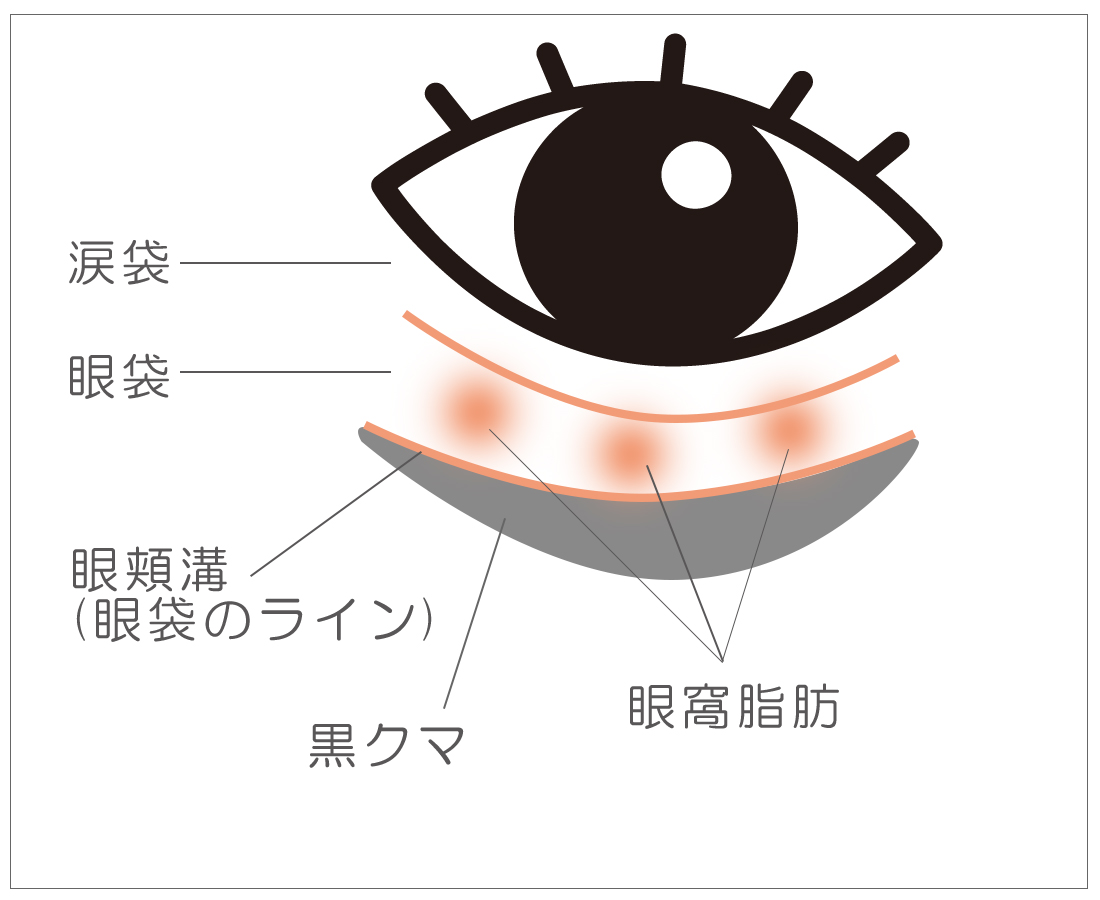 Orbital fat is said to cover the eyeball like a cushion and protect the eyeball from impact, but when it protrudes forward, it causes sagging called the eye bag (eye bag) that appears under the eye . [* 1]

When an eye bag is formed, a shadow is created by the formation of the eye cheek groove, which is the boundary between the sagging under the eyes and the cheeks, resulting in the so-called "black bear".

Orbital fat tends to protrude forward with age, as well as the effects of those who are born with a large amount and the skeleton.

Why Orbital Fat Protrudes With Age 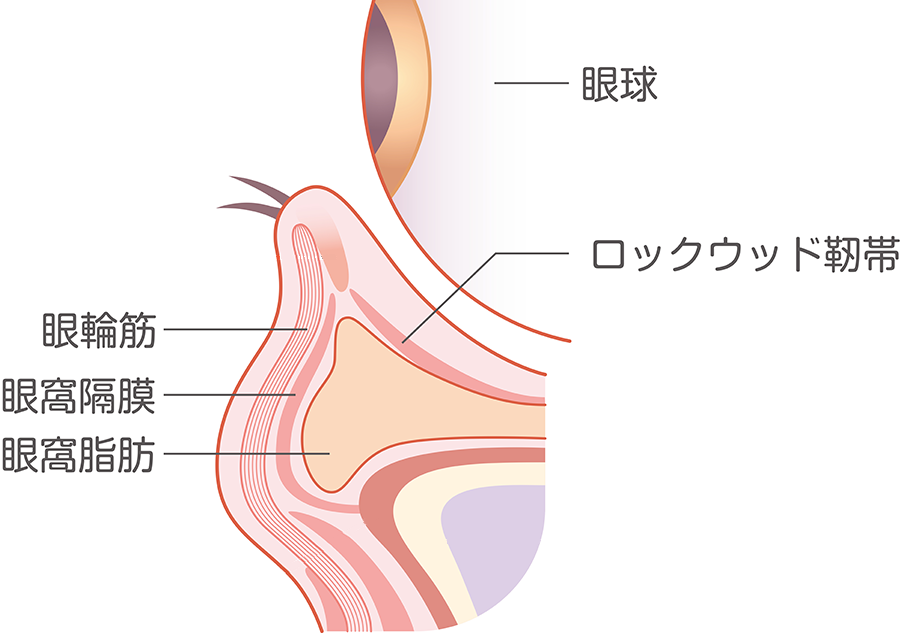 Orbital fat is surrounded by the Rockwood ligament, the orbital septum, and the orbicularis oculi muscle. It is also supported by the firmness and elasticity of the skin. However, when these supports loosen with age, the eyeball sinks down and the orbital fat that covers the eyeball overflows from its original position and protrudes, revealing the eye bag.

Orbital fat does not return to its original state when it protrudes, and it is not easy to hide it with makeup, but with transconjunctival degreasing, by physically removing excess orbital fat, sagging under the eyes and black bears Leads to improvement.

Those who are suitable for transconjunctival degreasing

If the transconjunctival degreasing method improves the sagging of the lower eyelids and black bears , it can be expected that the eyes will be refreshed and bright .

The tear pouch can be formed by injecting hyaluronic acid, but it may become more noticeable by removing excess orbital fat with transconjunctival degreasing .

With the transconjunctival degreasing method, there is almost no bleeding and the treatment time is about 30 minutes on one side.

Since electric scalpels and carbon dioxide lasers have a coagulation effect due to heat energy, there is almost no bleeding and the treatment time is about 30 minutes on one side.

With eye drop anesthesia, local anesthesia is performed on the back side of the eyelid after suppressing the pain of the injection needle of local anesthesia. Anesthesia does not cause any pain during the procedure .

In addition, painkillers are used to control dull pain that may be felt when the anesthesia is cut off after the procedure .

Since the incision area of the transconjunctival degreasing method is small, downtime such as swelling, swelling, and redness is about 2 to 3 days, although there are individual differences. You can wash your face and take a bath from the same day, and make up including eye makeup from the next day.

In rare cases, internal bleeding that looks purple to yellow under the eyes may occur, but it will subside in about a week .

In addition, because the back of the eyelids is incised , symptoms of eye rash and hyperemia may occur during the natural healing process for about 2 weeks .

Actions such as long bathing, drinking alcohol, and strenuous exercise may increase pain and swelling . Therefore, it is recommended to refrain from actions that improve blood circulation for about one week after the procedure .

In addition, it is necessary to keep the area around the eyes clean after the procedure to avoid the risk of infection . Follow the instructions for taking the prescribed antibiotics.

Symptoms may not change if the amount of orbital fat removed is small. In that case, improvement can be expected by performing the treatment again. On the other hand, the more orbital fat you take, the less the symptoms of sagging and black bears will be. If you remove it too much, it may cause dents .

Orbital fat is also divided into three blocks, which are often removed from the medial (closer to the nose) and central blocks. However, depending on the symptom, it may be necessary to remove it from the outer block as well, and if the amount taken out is out of balance, it may cause unevenness.

The transconjunctival degreasing method requires accurate diagnosis and sense, but if you are an experienced doctor, you can avoid the risk of excessive removal or laterality because it is removed in a well-balanced manner by imagining the finish.

Removing orbital fat reduces swelling and may increase wrinkles after the procedure.

If there is a possibility of wrinkles, improvement can be expected by combining the following treatments.

Combining transconjunctival degreasing with other methods

Fat injection aims to improve the firmness of the skin by injecting the fat collected from itself into areas with dents and dents .

There are two methods for fat injection. If the amount of fat is small with orbital fat alone, you will need to inject fat from your abdomen or thighs.

In the latter method, impurities are removed from the collected fat before injection.

Improvement can be expected by injecting into areas with wrinkles and sagging .

Hyaluronic acid is a component originally found in the body, and when injected into areas where dents and dents are a concern, the grooves become less noticeable .

Since it is physically lifted, you can feel the change immediately after injection, and if it does not form the desired shape, it can be dissolved with the solubilizer "Hyaluronidase".

Although it is a transconjunctival degreasing method that reduces sagging under the eyes, it may or may not be suitable depending on the symptoms.

Cases where the transconjunctival degreasing method is suitable

When the Golgo line stands out 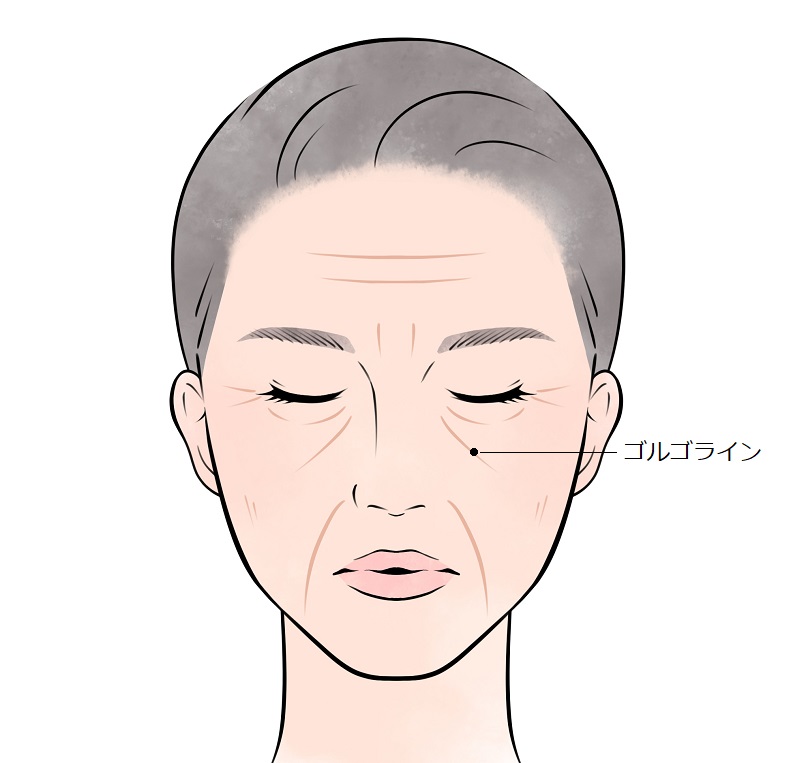 Wrinkles that occur diagonally downward from the inner corner of the eye are called the Golgo line or the blusher groove, but they are correctly called the Mid Cheek Groove, and the weakening of the orbicularis oculi muscle due to aging. It is said that it becomes more noticeable due to the decrease in subcutaneous fat .

If not only the protrusion of orbital fat but also the Golgoline is noticeable, the following method, which is different from the transconjunctival degreasing method, is selected.

The Hamra method can make the dents less noticeable by moving them to the dented buccal fold, rather than removing the orbital fat . In addition, the Hamra method may also remove the skin at the same time, which is effective even when there is sagging skin.

The back hamra method is also called transconjunctival orbital fat transfer (or transfer).

If the skin has slack

In addition to the protrusion of orbital fat, if there is sagging skin, the following methods are selected.

Lower eyelid wrinkle removal is an incision in the skin just below the hairline of the lower eyelashes to remove excess orbital fat and remove the loose lower eyelid skin .

If the skin is thin or has pigmentation

If the skin under the eyes is originally thin, removing the orbital fat may make the bear stand out. If the skin is thin and the condition of the blood vessels under the skin can be seen through and the bear's symptoms appear (blue bear's symptoms), we aim to improve it by supplementing the thinness of the skin with fat injection .

In addition, if melanin pigment accumulates due to the habit of rubbing the eyes or rubbing due to face washing, and the symptoms of bears appear (brown bear symptoms), laser treatment and tretinoin ointment as an ointment are used together to make melanin. It leads to improvement by promoting the discharge of pigments .

What you need to know before undergoing transconjunctival degreasing

Due to the swelling and swelling caused by the procedure, you may not notice any change in the sagging under the eyes or the symptoms of the black bear immediately after the procedure .

Recurrence of sagging under the eyes and black bear symptoms

In that case, please consult a medical institution.

Determine the amount of orbital fat to be removed, mark the measurement position of the take, and adjust the image.

Immediately after the procedure, internal bleeding and swelling due to anesthesia may occur.

If you are worried about the condition of your eyes when you return home from a medical institution, it is safe to bring sunglasses or a hat that can hide your eyes.

The contacts will be available after about a week . Therefore, you will need glasses because you will be returning home with the naked eye.

How to choose a medical institution to undergo transconjunctival degreasing

Depending on the symptoms, such as sagging skin or wrinkles or dents under the eyes, removing orbital fat may not improve the condition. In this case, performing transconjunctival degreasing may result in the feeling that "it did not meet expectations" or "failed".

However, an experienced doctor can accurately determine whether the volume of orbital fat is high or low, which fat should be adjusted, and whether fat injection is necessary as well as transconjunctival degreasing.

Make sure to check the condition of the tissue around your eyes and select a medical institution that has a doctor who can suggest improvement methods according to your symptoms .